Independent America, None Of The Above 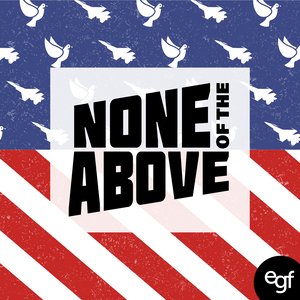 “None Of The Above” supplies new answers to America’s foreign policy questions.

Season 3 premiering April 12 offers a novel take on America’s role in the world.

Find “None Of The Above” at www.noneoftheabovepodcast.org

New York, NY – The Eurasia Group Foundation (EGF), dedicated to helping people make meaning out of the impact geopolitics has on their lives, today announced the launch of Season 3 of “None Of The Above,” a bi-weekly podcast showcasing historians, activists, journalists, and global thinkers who supply new answers to America’s most pressing foreign policy questions.

Premiering April 12, Season 3 will challenge conventional assumptions about America’s role in the world. In each episode, the country’s most original thinkers dig into a wide range of foreign policy topics: the U.S.-China rivalry, war powers, the defense budget, post-9/11 U.S. militarism, and more.

This season’s inaugural episode features EGF board president, Ian Bremmer, and explores how the U.S.-China relationship is playing out in Europe. “China is vastly more powerful than it has been at any point vis-à-vis the U.S,” says Bremmer. But is Washington’s current approach working? “What [Washington] needs to be doing is coming up with, both domestically and internationally, a series of policies that make the U.S. and its Western allies so robust that the Chinese actually… want to align and integrate their behavior more with us because they’ll lose out.”

“None Of The Above” is hosted by EGF senior fellow Mark Hannah, who leads a project exploring the prospects and benefits of a less militarized U.S. foreign policy. Mark’s analysis has appeared in TIME Magazine, The Guardian, The New York Times, The Washington Post, Politico Magazine, PBS, and The Boston Globe, and he has been a commentator on MSNBC, CNN, CNBC, Fox News and Bloomberg.

“‘None Of The Above’ is not your typical foreign policy podcast. In an era where international ‘engagement’ has become synonymous with armed intervention and ‘leadership’ is invoked in making the case for the coercive use of economic and military might, we wanted to spotlight new ideas for effectively conducting U.S. foreign policy. Not every international problem has a military solution, and many policies which reflect the prevailing consensus inside the Beltway are unrealistic or unwise,” said Hannah.

“None Of The Above” is available on all major distribution platforms, including Apple Podcasts, Spotify, Stitcher, Castbox, PlayerFM, and Castro.

“This podcast is important because it opens up the conversations, shows divergent viewpoints that you don’t often hear, all while making geopolitics approachable to everyone,” said EGF’s executive director, Allyn Summa. “It has never been more important to showcase diverse voices and learn from perspectives that might differ from your own.”

“None Of The Above” is produced by the Eurasia Group Foundation, a nonprofit founded by Ian Bremmer. It is dedicated to helping people make meaning out of the impact geopolitics has on their lives, and bringing nontraditional voices into the national conversation about foreign policy and national security. Audiences can engage with theEurasia Group Foundation at www.egfound.org and on Facebook, Twitter, LinkedIn, YouTube, and Instagram.

More in Independent America, None Of The Above